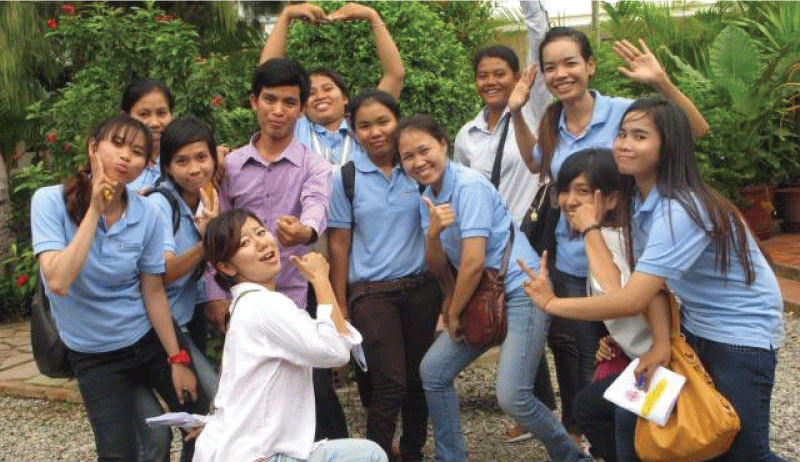 What I learned through one year internship in Cambodia

Three things I learned through an internship abroad

My name is Yoshie Iwasaki did an internship for one year at a Japanese NGO in Cambodia creating jobs for village women and eliminating poverty with the mission “the world without child trafficking”. In this article, I’ll tell you that three things gave me big learnings during the internship in Cambodia.

1. Work is done by teamwork, not alone.

At that time, I lost sight of the objective of the internship abroad.
I couldn’t feel that I was helpful for local women. Furthermore, there were lots of things I couldn’t do. “What is my worth?”, The axis of thinking was always toward to “myself”.
However the important thing is “toward to the goal”. Individual troubles and a sense of disgust for oneself, such things are not very important for the organization. It’s important to commit any part of the team goal. Everyone is different, so someone can do but others cannot do. Someone are good at but others are poor at. If you can’t do that, other team members support you and carry out together. It’s important that build on what you are good at, help each other, match the goals of the organization with those each member aims for. As I heard the story of Mrs. Namba, I was able to switch my thoughts like this.
“As working not alone, just help each other. I will cover what others are not good at, if there is something the team can not do, I will take the initiative to cooperate”, I rebooted my mind well and this experience helps me at my current work. It was good experience that I got such an insight when I was a university student.

2. If you show your weakness, you will gain 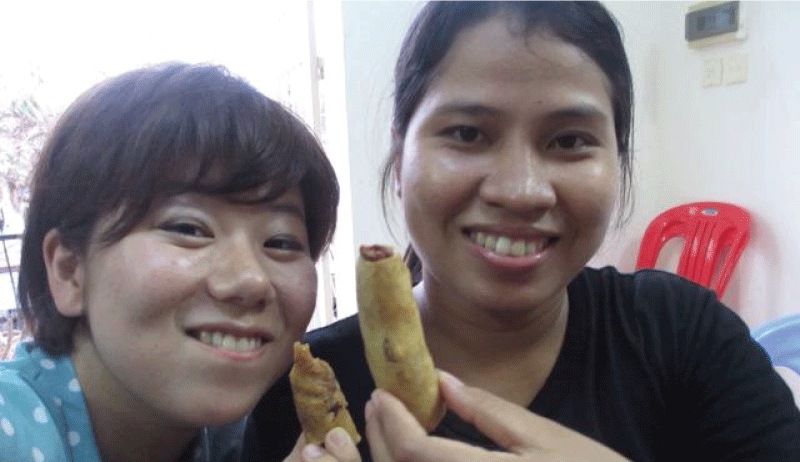 This also has connection to number 1 what I learned, I had high pride, “I can do everything”, was clumsy, tried to do everything alone, and had not wanted to be considered “She is useful”.
However, when I started to carry out my tasks, sometimes the completion which was 80% for me was 30% for others.
When my boss pointed out that I didn’t achieve the goal, I was shocked like “I tried hard but was denied”. I have a regret that if I had talked to my boss like “I don’t understand it” or “I tried it like this but I don’t understand the next step” in an early time, I was able to carry out my tasks faster.

The reason for thinking like this was triggered by a certain incident with the manager of the sales team I belonged to.
At that time, for the renewal opening of the shop operated by the organization, I had troubles and argued with a local construction company, I and the company were in soured relations. For example, they asked me “Tomorrow 10am we’ll construct, so please stay there at that time” so I was waiting them there as promised. I waited and waited, but they didn’t come. Even I called and sent a message though, I couldn’t get in touch with them. Eventually I had no response at all on that day. I blamed “Why you don’t keep promises you said yourself?” day by day on phone, I communicated with them in the style of Japanese.

Then, the local manager who was watching the interaction between me and the construction company and she told me “Since there are Cambodian methods and ways of speaking and how to treat people, leave this to me”. She helped me to respond to phone calls and on-site supervision, as the result, I was able to build a relatively good relationship with the company with her help.

I thought “I have to solve the problem alone, because I was assigned to this task” and I didn’t ask anyone to help, didn’t try to ask, worked alone. However, even a foreigner like me ask this or that to local people, the culture and the way of thinking are different in Cambodia. Perhaps, the construction company staff thought that “A Japanese girl who knows nothing, say with an attitude. Cheeky!”

From the earliest stage, I should have consulted about what I was in trouble and where I was struggling, and if I had tried to borrow the wisdom of other people more, I was able to build a relationship with the company and the progress of the renewal was able to be advanced as well.

Everyone has a lot of anxieties and things they don’t understand.
Be afraid of failure and being denied from people, go forward alone. Or, show weakness and ask people “I can’t do it please help me” honestly.

It is necessary to have the courage, when you show your weakness and involve others. But I realized that it is very important to guarantee the quality and speed of the work as a result.

3. Have a consciousness of “What shall we do next?” 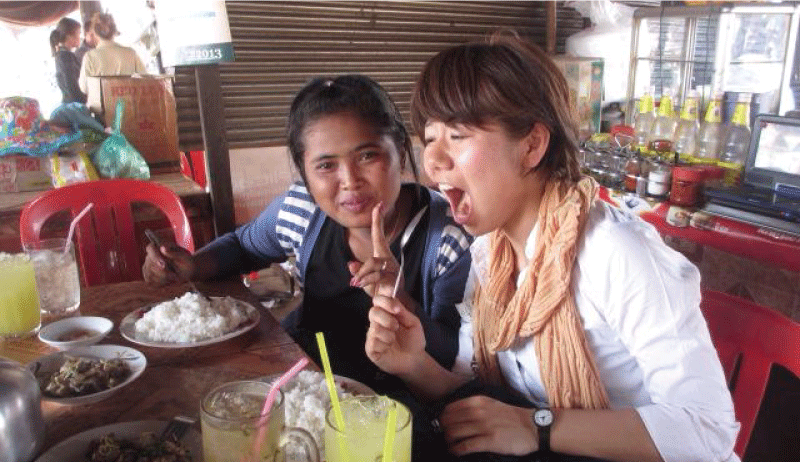 In the beginning of the internship abroad, when I made a mistake or I got lost, I thought about the failure and mistakes too much and spend days stewing in that. However, even spending days stewing that, I couldn’t never find a positive answer. Time waits for no one. Learning from failures and taking advantages of that experience were required for myself and for the team.
For that, I tried to think stuff in the following cycle.
“Something’s going to happen” → “Figure out the reason and the cause” → “What should we do to not make the same mistake” → “How can we turn it into a better system and mechanism?”

One of the experiences during my internship abroad triggered this way of thinking.
One day, I talked with a shop staff at the shop as usual, she told me “Yoshie, amounts don’t add up.” I checked the sales history and the amount existing in the shop, it was not same.
As I heard them, I found out one suspicious fact. That was when shop staffs went to buy their lunch and went to a bathroom, they sometimes asked outside person to stand at the shop without locking the cashier. I didn’t want to doubt the outside person who was asked to stand, I could blame that asking someone to manage the shop was a personal management issue of the shop staff. However, for me who had been angry about the local staff for many times, I thought that I would repeat the same thing just by accusing them and exploring the solutions individually.
Then, at that time, we discussed at the meeting about how to solve the issue with everyone, including manager, other shop staff, sales team and created the awareness to protect the rules with a sense of crisis for everyone. As a result, I felt that trouble of losing money was less than before, and that the consciousness of “protect the shop” had grown throughout the team little by little.

It’s easy to blame someone. But what really matters is to think about how to take countermeasures by taking advantage of that failure. Even if there is something that does not work, I can not change the past anymore. Instead, I think that it is important to have a positive thinking, “What shall we do next?”

Through getting the insights from the internship abroad 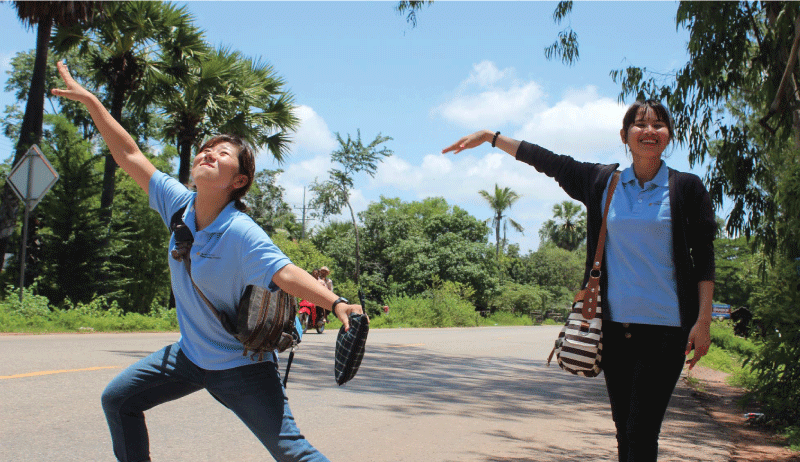 Even if the organization has done wonderful activities and dealt with good merchandise, regardless of nationality, whether people working there are excited, are they really working satisfied, are they able to pursue their own dreams, or are they happy working?
I felt strongly that the feeling of satisfaction of such “human” mind is the most important in running the organization.

Creating the work environment that each person can work with high motivation and pursue their own dreams and hopes.
Merchandise dealt with, services and place don’t matter to me right now though, I want to be a person who can contribute in my favorite countries and regions including Cambodia in the future. For that, I keep doing what I can do my best now.