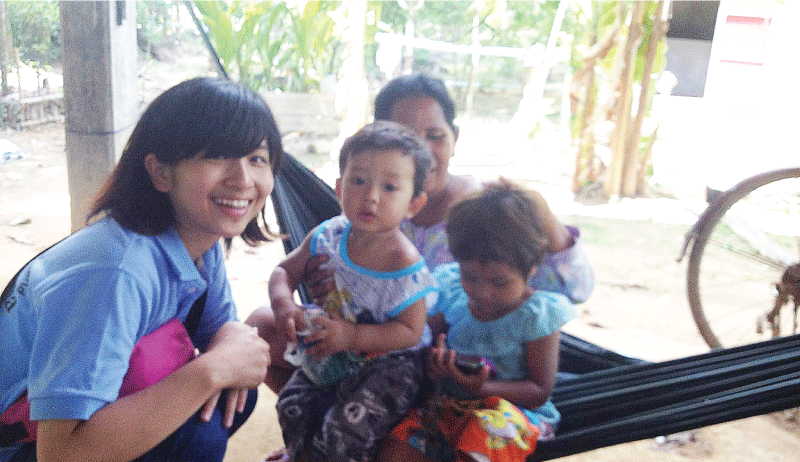 I’m Yuki Miyagawa, 23 years old this year and 4th-year student.
I took a gap year in the 3rd year and did an internship at Kamonohashi Project in Cambodia for 9 months from April to December 2013.

The role in the internship abroad 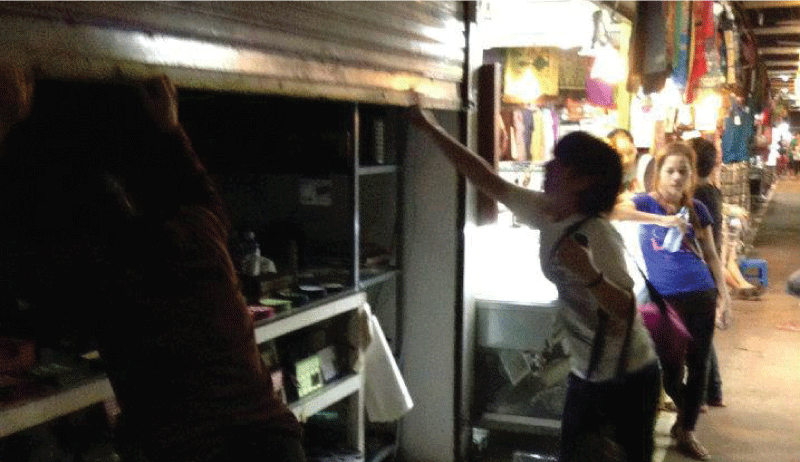 The organization which I did an internship at was NGO “Kamonohashi Project”. The organization aimed the world without child trafficking and in the Cambodian project they created jobs for women in the poor family through producing and selling grass products.
And I involved in opening a new shop and was in charge of the shop manager.

I decided to take a gap year from before. Because taking a gap year at a national public university was free and I thought that I would be a fool not to take advantage of having free time for a year I would be able to do what I want to do. However, I thought it would be a waste to use the gap year for just studying abroad so I decided to join an internship I would be able to engage in a business in developing countries I had been interested in.
There were two reasons why I chose Kamonohashi Project as the organization I did an internship at. The first one was that they had a goal to make their project independent from Japanese donation. The other one was they were trying to solve the activity through business. I felt the sustainability of activities, not mere charitable projects.

Before going to Cambodia, the role of “the new shop manager” was fixed, but along with that, I got many anxieties. Among them, I was particularly concerned about three points: 1. language, 2. disastrous sense of art, 3. sales inexperience.

About language, I went to Cambodia without English skills at all. I never took an exam of TOEIC, I took Skype English classes a little before traveling.

About the sense of art, I had no creativity at all lol. I was good at imitating a model, but I was not very good at producing something from scratch. My art score was also in 2 of 5.

I had a customer relationship experience at a part-time job of a restaurant, but I had no sales experience. Sometimes I disliked being served in shopping so I had an anxiety that Could I serve as a seller. 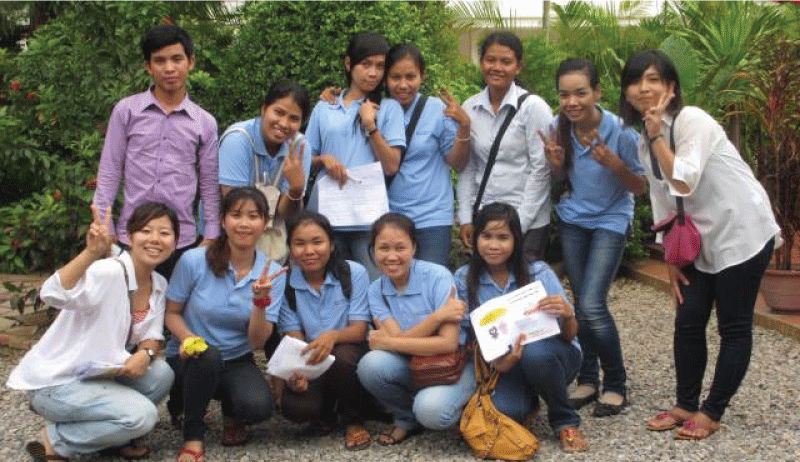 I went to Cambodia with such anxieties a lot. What I think after finishing the internship is really simple and common but I am glad that I did it.

Among the three anxiety points, I felt before the internship, there was no need to become uneasy at all in regard to sales inexperience. Because interns’ seniority was a professional involving people.

I will never forget the first day of the internship. When I went to the office, she spoke to me “Hello!” with a smile, I was relieved very much that “I am all right.”

During the internship, I had days to stand at the shop with her, in that I learned with fun like “I should talk to the customer like her” “It’s nice to have a description of the item like this”. Of course, it was not only fun but also there were plenty of scenes where I thought it was difficult to let customers buy our products with satisfaction in a short time.

I couldn’t do anything for the sense of art, but I changed my mind that I couldn’t do it because I didn’t have a sense. I studied the basic shop decoration and had a Japanese expat who worked in Cambodia check the shop decoration. I began to think that it is important to get basics as “knowledge” rather than to have “sense”. For example, when arranging items, place it from a light color to a dark color from left to right. This is what you can do regardless of sense if you just know that. I understood that it is the importance of attitude to think not “I do not have a sense, what I should do…” but “Follow the example and try the basics”. However, I had regret that I wish I went to a museum and a beautiful store before going to Cambodia.

Regarding the language, I felt very regretful. “I can not talk anymore! Impossible! I do not want to talk to anyone!!!”, there were times when I thought like this. I was frustrated that I couldn’t express what I thought, so I studied English myself at the site with a book called momentary English composition writing. I had an English complex until the end of internship but I began to think that the language was not everything. When I had worked together for a long time, I would understand what they want to say and understand their way of talking. Don’t give up speaking because can’t speak English. I think that attitude to try to understand each other is important.

Message for those who are considering to join an internship abroad

Reading chapters above, you might think that my internship was really fulfilling and looks like a good story, but it was, of course, not only fun. I felt frustrating a lot, and there were also times I was disgusted by my helplessness. Even so, I think it was good to join the internship because I liked everyone in the team who worked together and Kamonohashi Project.

When starting something new, worry and anxiety do not run out. However, I think that if you go to the site, if you start doing it, you can find a solution soon. After all, everything is up to you. Being honest with you, acting according to the feeling of excitement to yourself, you definitely do not regret it.