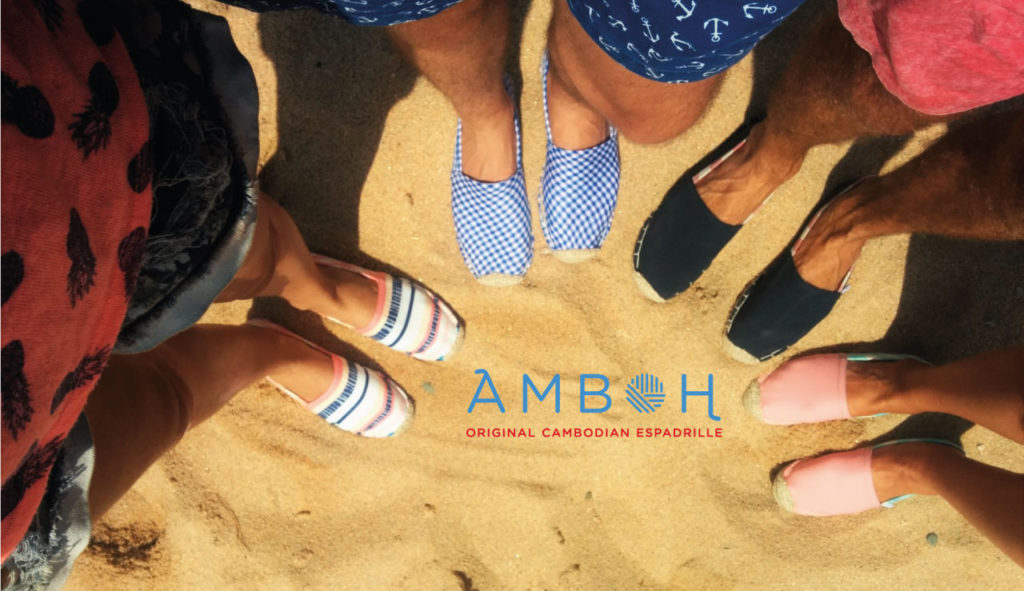 “I made your shoes!” Know the producer of every piece of cloth you wear: Interview of Sebastien, Founder of AMBOH Espadrilles

Leboost Cambodia is a French communication/marketing company providing residents of Phnom Penh with various information on some of the hottest spots in the city including bars, restaurants, clubs, shops and spas. The country director of the Cambodian market Sebastien Gertgen (28), however, established his own shoe brand and started his entrepreneurial journey after settling down in the country. AMBOH Espadrilles -cotton yarn in Khmer- made from 100% cotton fabric and jute sole, is a “Cambodian brand” and creates employment for Cambodian garment workers with a decent working environment and a fair wage. When a new idea of the design for the shoes comes up, Sebastian would go to the local market and find the closest color to his image to make a prototype by himself. The brand’s lineup now includes 12 models, and 2 type flat and ballerina of Krama scarf (the most traditional clothing of everyday use to Khmer and 100% made in Cambodia).

Sebastien started his own espadrilles shoe business in August 2015 after 2 years from the first time he moved to Cambodia. Like many others, he was also one of those who has been enchanted by the beauty of the country and the humble people that reside in. “I like Cambodia, and I wanted people to know the good side of it. More importantly, I want to make the workers behind the brand participate to the raise of Cambodia, the next fashion place in Southeast Asia”. It is undeniable that sometimes developing countries, especially countries like Cambodia with a devastating history, can be associated with negative images by outsiders due to the international reputation of their delays in economic development and industrial modernization (if they are the justice at all), and lack of transparency in politics.
Sebastien told us that he wanted to create a Cambodian brand using Cambodian materials, and for Cambodian people. Yet more importantly, “another reason why I started this business,” he added, “is coming from the anger towards multinational companies, I think.”

Do you know the real cost of your clothes?

In Cambodia, the two main industries underpinning the country’s economy are tourism and garment manufacturing. Whilst the latter consists approximately 95% of the country’s export, the low wage* of garment workers has become the determinant to attract foreign investment, thus plays a crucial role as the backbone of the national economy. 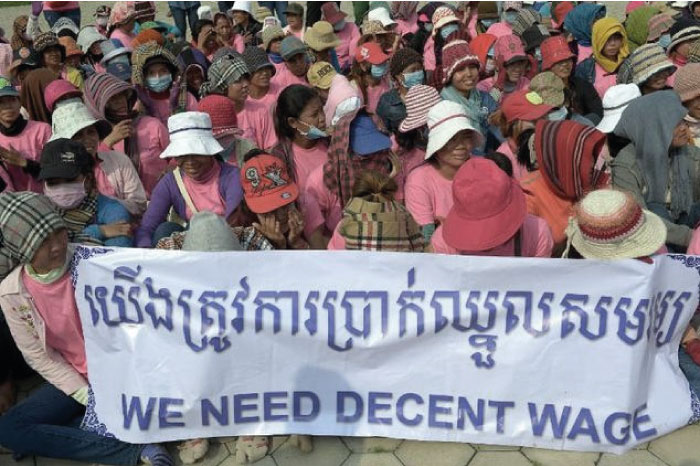 *Although the minimum wage of garment worker has been improved over the past years and raised to 140USD/month in January 2016, the workers still remain as the bottom income group in the country.

Controversial as it may be, the world’s most renowned fashion giants such as H&M is built on such a dedication of the most underprivileged group of people.*
*https://www.rt.com/news/240069-discrimination-workers-cambodia-retailers/

Sebastien expressed, “I don’t understand why people can buy something so much more expensive than the real cost.” A pair of beautifully designed and fully customized AMBOH shoes will cost 20-30 USD in which the cost including a fair wage accounts for something more than 10 dollars, therefore generates 2-3 times of benefit. Whereas a multinational apparel brand can tag the price 5-6 times higher than the actual expenses, and the large part of the profit would go to the designer and advertisement to maintain the brand image, whilst the wage for garment workers are left considerably exploitative.

“Big apparel brands like H&M does not own any factories themselves.” Sebastien explained the trick behind the surprisingly cheap clothes produced in Cambodian garment factories. “What they do is to find places that can produce plenty of cloths for their brand, and ask to produce something like 5 million pieces of T-shirts at once with very cheap price. This offer is too good for the factory owners to decline even if they cannot make any profit because as long as the contract continues, the factory keeps running on. However, it worsens their finance and the severe consequence is that the factory will have to offer an even lower price to attract more clients to sustain the flow of their business”. This vicious circle, of course, affects the welfare of the garment workers adversely.

According to the Clean Clothes Campaign (CCC), garment workers in Cambodia often live in rented-rooms in suburb areas near the garment factories producing clothes for international brands.

“Three to six women share just one room, not bigger than 8 square meters, often even without a window or any fresh air. No furniture, simple plastic sheets on the floor to sleep on, a toilet and portable gas stove with some pots for cooking.”

“A testimony of a garment worker: She hopes that the brands will increase the minimum wage as it is really hard for her to cover all her expenses and still send some money home to her family. The only food that she can afford is the one in the street near the factories which is not the healthiest food.” 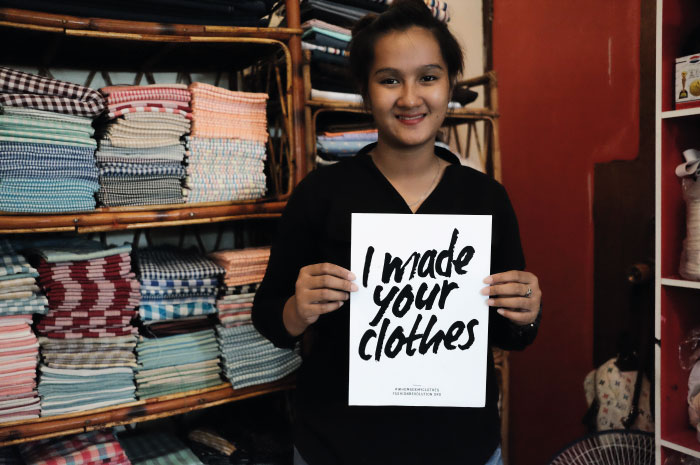 At school, Sebastien did not have much desire to become an entrepreneur. “I was a good student in a way. I was very serious in study especially in high school for an exchange program. The system was that students who had good marks had the priority to pick the country they wanted to go.”

He later graduated from a college in Paris with a degree in finance and begun his first career as a sale. “Being an entrepreneur is challenging but it gives me freedom and allows me to be creative. When I was a sale, I had to prison myself,” Sebastien recalled. 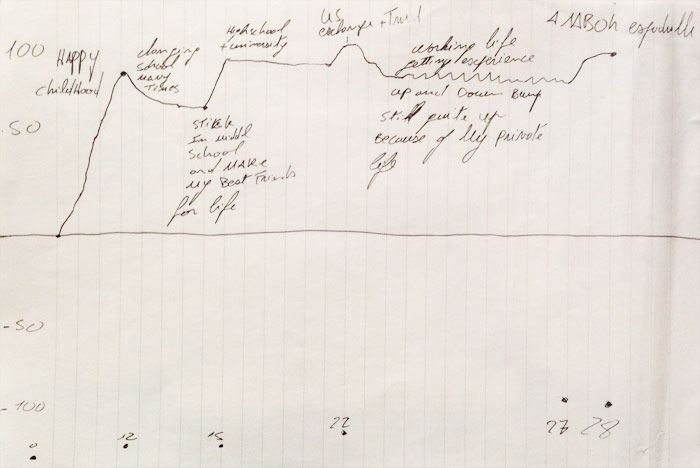 It didn’t take long for Sebastien to find his way into the management field, and it seems his management style matches well with the Cambodian culture.
“One thing good about Cambodia is that the distance between the corporate president and workers are very close. And that’s the only way to manage people,” said Sebastien. For him, the daily motivation of his work is to see his workers and customers and to see when the result comes up.
In a place where the employer and employees meet each other every day, work in the same space and have conversation face to face, the exploitive idea of making surplus capital at any cost simply became unimaginable.

Sebastien now holds a mission to aim at “the same but bigger” for the future brand development. Even only at the age of 28, he stated that he wants to welcome all failures a manager can possibly experience in the next five years. His project in Cambodia is a reminder for all of us to think of the people who made our clothes and a revolution to convert today’s mass production and mass consumption way of life to a more socially and humanly responsible one.

Message from the entrepreneur that brought impact

“Talk with many people and discover their worlds. See what they do in their positions and ask yourself if you want to do the same. When you find your own way, the best part is that one day, you might be able to make your hobby as your job.” 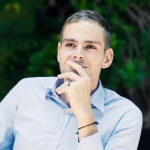 An MBA holder graduated from the EDHEC Business School, Paris. Sebastien started his professional career as a sale and later found his way into the management field. He moved to Cambodia as the country director of Leboost and started his own shoe business in August 2015. AMBOH Espadrilles is a new “Cambodian brand” which produces espadrilles shoes and karma with materials purchased in the local market and 100% handmade by skillful Cambodian craftswomen.

Anyone who has been to Phnom Penh would probably find that the square-block type road is much more complex than it may seem, and it’s quite the same for a local tuk-tuk driver. When I have left no choice but call Sebastien and confess that I would be late to the appointment because we (me and the tuk-tuk driver) were totally lost, Sebastien came to pick me up with his bike. Just like what this gentleman said in the interview, the tip to run a company in Cambodia is that “never overreact in a bad way when bad things happened”, his flexibility, generosity, and the stance to remain close to his employees add extra warmness to the AMBOH shoes handmade by Cambodia girls.