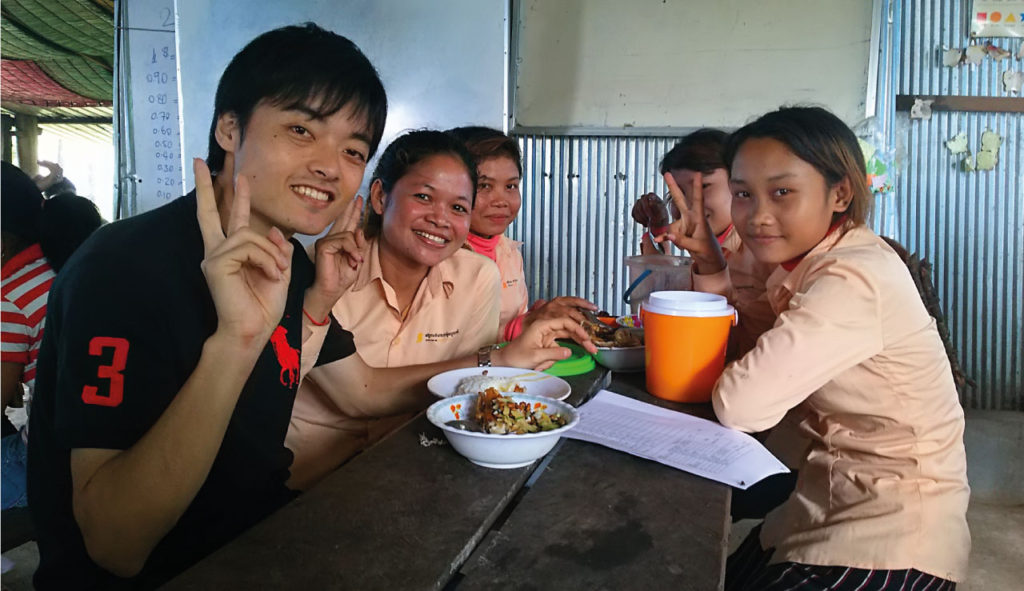 Through internship in Cambodia, Cambodia became my second home

Many students are wondering what to do in the long and valuable time until graduating from university after finishing job hunting. Currently,
Kai Yuichiro, currently setting up overseas production factory at the Environment and Energy Saving Department of the trading company, studied development at the graduate school in the UK after graduating from the engineering department. After returning Japan and finishing job hunting, he joined a short-term internship at various domestic companies. Then he participated in an event about internship by chance and decided to do an internship in Cambodia. What kind of thing did Kai during his internship abroad in Cambodia use for half a year after job hunting? I made an interview and compiled the experience story. 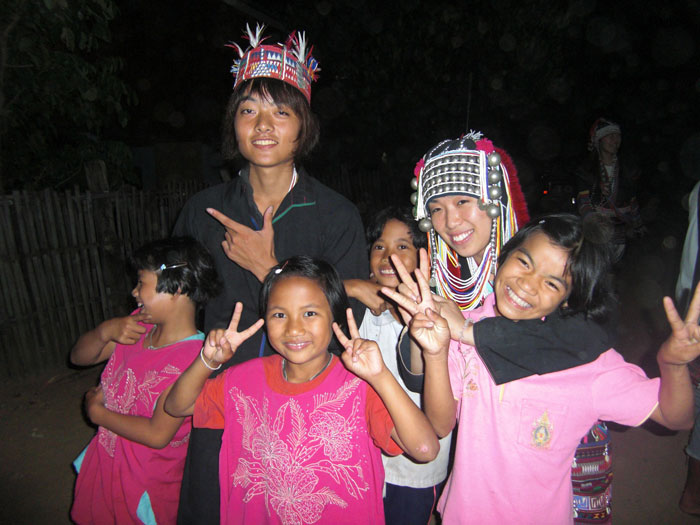 Kai who finished studying abroad at the master course of the University of Manchester in the UK and obtained a job offer from Japanese trading company in his job hunting after returning home. After job hunting, he joined a short-term intern at various companies for the reason “I would like to accumulate experience working in the organization in order to work with a broad perspective on the organization structure of the company”. And, at an event that happened to participate in searching for an intern, he found the internship opportunity of Japanese international NGP, Kamonohashi Project (Kamonohashi)*. Kai became interested in international cooperation through a study tour that his friend took him. So it was the best opportunity for him, “I hoped to create a mechanism to support young people who live in rural areas of developing countries and are forced to work hard by labor migration”. He was sure that “This is what I wanted to do” and decided to participate immediately.

*Japanese International NGO that aims to create the world where children are not sold. They create employments in rural areas in Cambodia.

What was the goal during the internship in Cambodia?

Internship students at Kamonohashi mainly worked in rural areas of Cambodia. Kai told me that “My main role during this internship was building and installing a production management system of the workshop. At Kamonohashi, Cambodian women produced and sold handicrafts for foreign tourists so I mainly built and installed the system that managed the number of production and the production time.”

Kai said he did the internship in Cambodia with the following two goals. “First goal was to work with foreigners in developing countries. And the another goal was to hear the real voice of people who live in developing countries. I feel the internship abroad is the chance that students can get work experiences through the internship and know cultures, common practices, and people of the country they work. I think that only a part of each country can be known if it is a short-term stay and only the sightseeing spot as an exhibit that is far from the real situation of that country can be reached.” 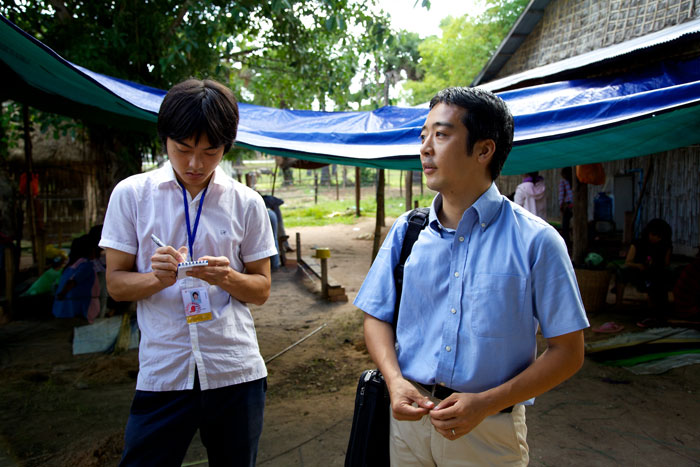 “It was difficult to produce results when I did my internship abroad in Cambodia”, Kai thought back. “It was really difficult to produce results in a short period of time, particularly in half a year. I could build and install the production management system, but the system was not used when I visited Cambodia after my internship. In the production management system, it was necessary to construct an easy-to-use system so that the Cambodian staff could acquire necessary information. When I was undergraduate at university I studied the system but didn’t have the work experience in system development so I felt that this role was too hard to complete in 6-month from the middle of the internship.”

Even so, Kai said that he could achieve the two goals set before the internship abroad. Regarding working with people from different cultures in developing countries, “In abroad, if
you work not based on the premise that miscommunication occurs, the deliverable will be completely different what you aim, so at the time of system construction I shared the direction to the Cambodian staff more than necessary and talked about the problem of the system often. The system that I made was used by Cambodian staff, so I had to ask their opinions like ‘I need the feature / I do not need features’. I had to get such feedback from Cambodian staffs, but I couldn’t get their feedback if I just asked them. So I created a flow and a format to share each feedback, they were able to evaluate their usability properly and we were able to complete the system.”

Moreover, Kai said that there were two things that the experience of the internship in Cambodia helped his current job. First one is, “Through the experience of creating the flow and format to let Cambodian staffs report their feedback themselves, I think that ‘technique to finish work within the delivery date’ was improved. Even if I asked Cambodians to work, there were many cases that they would not be completed unless I followed them. For example, when there was something they did not understand or when they were not in time for the deadline, I encouraged them to share their situations on Dropbox through creating the format in Excel and Word to let them share their issues occurred and what they didn’t understand” he looked back.

The other one is, “I got an in-house brand, ‘Southeast Asia = Kai’. I am doing business as Vietnamese chief. As I had the opportunity to speak my internship experience at my company on a daily basis. So everyone including my boss recognized that I worked in Cambodia as an intern for a half-year. My in-house brand established as the person have experience of living in Cambodia and talking in Khmer language and I am confident that I can fit in the local society of developing countries. It is rare in my company that who lived in developing countries for a half-year as an intern. I was chosen to be in charge in Vietnam because this my in-house brand and I desired to involve in the project in Vietnam.”

Realized bad points of developing countries. Still Southeast Asia is “where I want to stay” 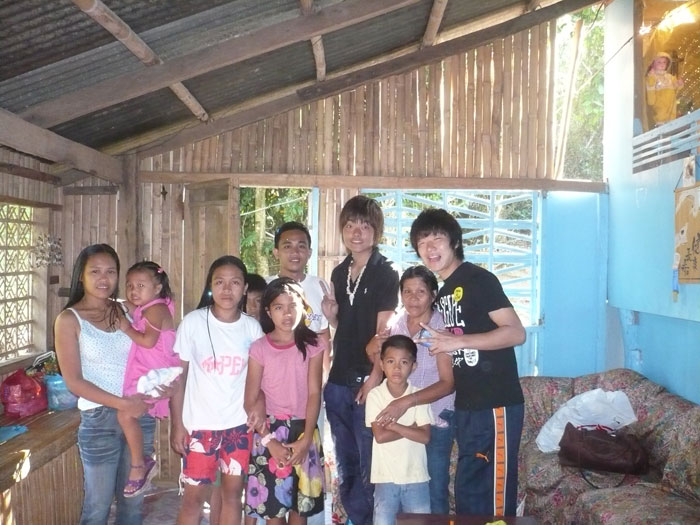 Kai told me that in the internship abroad, he not only gained work experience but also heard the voice of the people live in developing countries. “I had to learn local language in order to do an internship abroad. By learning their language, going to rural areas, I was able to hear their real voices. I think I could see the bad points and good points of rural areas. I only saw the good part from a third party perspective so far. But, by living in developing countries for long-term, I found there were not only good things but also bad things. For example, staying a long time in a rural area made me feel boring sometimes, haha. Before the internship abroad, I just wanted to live in Southeast Asia vaguely, it was also an opportunity to think about whether I really want to live in rural areas of developing countries and I was able to reconfirm that Southeast Asia is the place I want to stay. Everyone seems to be like a family even their blood are not connected. When I visited there again they said: ‘Welcome back’. I like the relationship unlike in Japan. I feel nice that I have ‘A place to return’ in the world like my home. The people in the rural areas have a bit of work but they are not stable. There is a problem such as not being able to let children eat nutritious food easily, so I hope to help those kinds of things from now on.”

In order to work in the rural areas of developing countries in the future, I carry out the business launch now in Vietnam

Kai said that he currently worked in Japan and had few chances to work in Southeast Asia. He shared his future goals to work in rural areas of developing countries. “In the short term, I’d like to finish the current start-up project of the production plant in Vietnam in about 4 to 5 months. Now I want a career that I worked abroad as an experience value. To that end, I will concentrate on my current project in Vietnam and I would like to bring it to some level. Based on that, I would like to create jobs in rural areas of Asia in half a year as a medium term plan. I think there are things that local people want to do and what I should do in rural areas in developing countries. I think that I should find it in the future.”

Summary of Kai’s internship in Cambodia

Kai’s self evaluation of internship abroad