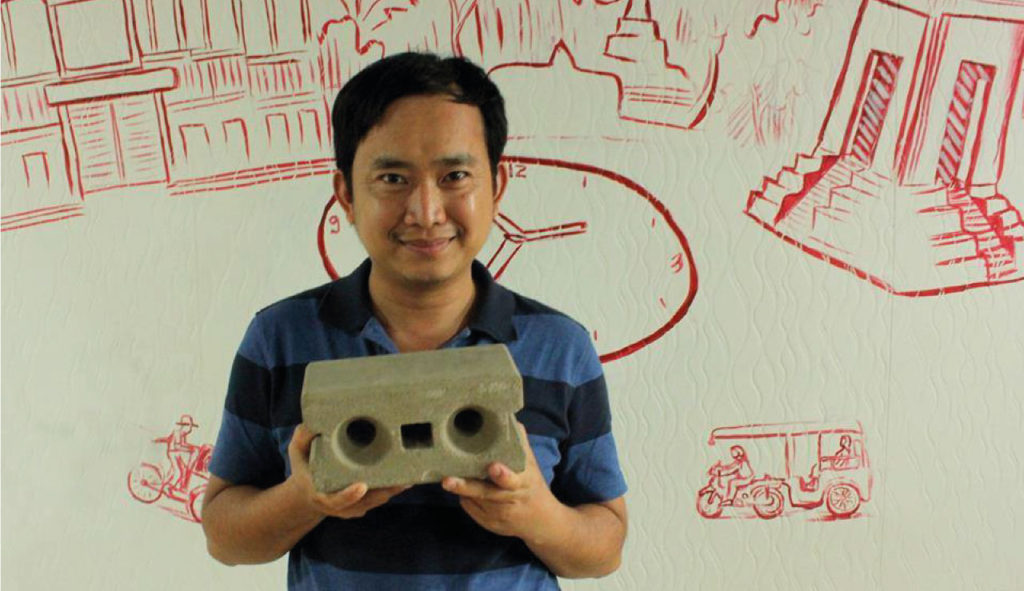 Who has never dreamt to play around or even live in a house being built entirely out of Lego blocks? Now, it is not just a childhood imagination anymore. With Kongngy Hav’s interlocking mud bricks, the dream house did not only come into reality, but also become much more accessible, environmental and affordable than a traditional one. 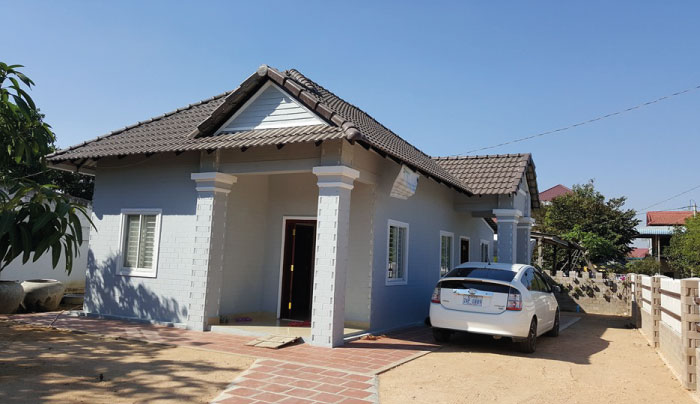 Kongngy (31) does not have any degrees in construction nor engineering, and no one believed in his idea when he determined to build houses that the poor can also afford to buy. What made this man to dedicate everything in his idea? And how has he overcome those objections and opened his own path? Let’s discover Kongngy’s journey together.

Childhood hardship, kindness of strangers and first-hand experience of housing affordability crisis led to the birth of a social entrepreneur 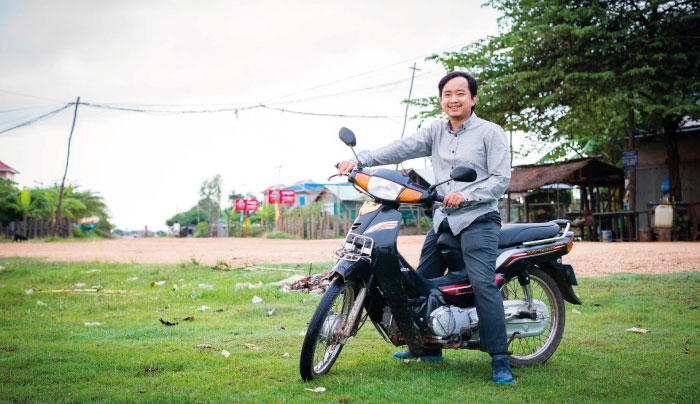 Kongngy’s life did not start easy. Born in Kampong Thom province, the family, with 6 children, faced a severe financial crisis when he was 15 years old. ” During that time, my mother sew for 100 – 200 Riel (2.5 – 5 cent, 1,000 Riel = 25 cent) per a piece of cloth whilst I helped the family through agricultural activities such as growing rice, bananas and papayas. In Cambodian culture, it is something much embarrassing for a teenager boy to sell bananas and papayas at the market. It also affected my feeling in studying for secondary and high school. In grade 12 when everyone needed to focus on the study for the national exam, I needed to teach English for only 100 Riel (2.5 cent, 1000 Riel = 25 cent) per hour to support my study. The whole family did a lot of sacrifice,” Kongngy reflected. Though thanks to his talent in studies, he could pass the national exam and continue to study his bachelor degree in sociology at the Royal University of Phnom Penh (RUPP).
During his school years, Kongngy engaged in NGOs such as Save the Children, and worked for both public and private sectors after graduation.
Although Kongngy started working his way out, he lived in an area surrounded by many garment factories called “Veng Sreng – Canacity”. “In 2009, I had a motorbike accident and was unconscious for a while. It was at night and very quiet. During that time, when someone got traffic accident, people might rob your bike and properties. I was very surprised to find all of my belongings with me when I woke up. I was saved by five ladies (who were garment workers), and all of them were very kind. They sent me to my home even it was very far from their places. I wanted to do something for them with my 7 years experience in NGO because I knew how difficult their lives were.”
One of the primary concerns of Kongngy regarding the workers was their squalid living conditions, in which 4 – 5 people are usually packed in a small and stuffing room. Having a bitter childhood experience himself, Kongngy said that he had always wanted to do something to improve the lives of low-income group people. However, it was only when he acquired the opportunity to move to Australia with his wife, and accidentally found a YouTube video about houses built by rice straw, the idea of the easy-to-construct, eco-friendly Lego home pinged into his head.

In 2012, Kongngy started his new life in Melbourne. Having a degree in Sociology and MA in Development Studies, Kongngy has always concerned about the lives of the poor, yet did not know what to do at that time. Yet without this mind, he would not come up with the idea to harness the rice straw technology for the underprivileged people in Cambodia when he watched the video clip.

It would be rather rare to come across an entrepreneur who has never met any opposition when they are about striving for their dreams.

“I had tried to tell my idea to build affordable houses for Cambodian people to nearly 200 people, but no one believed in what I was talking about, even my wife. They said I’m crazy because I could have a good salary in Cambodia as I had some international working experience.” These objections brought Kongngy back to Cambodia in 2013, and his ambition to create a system which helps improve housing affordability in Cambodia grew even stronger when he realized that he was still one of those people who cannot afford to buy a house. “Now we already have a good education and good employment, but we still could not afford to buy a house. How many millions of people who are below this situation can afford it?”, Kongngy thought.

In Cambodia, housing affordability has become a significant issue in cities due to migration from rural areas, land grabbing, rising demand for housing for young generation and foreign investment etc. “If you look at our GDP per capita this year, we earned about 1200USD – which means 100 USD/month. My question is that can this people save 50 dollars per month? The answer is very hard. I looked at the statistics, and a place to live (but not a place to stay, Kongngy emphasized) would already cost approximately 42,000 USD in the outskirts of Phnom Penh back in 2008.” Kongngy continued, “now let’s assume people can save 50 USD per month, (600 USD per annum),and it should take them 70 years+ to buy a house. But the life expectancy of the country is 69 years old (2015). It means that in their lives, based on the salaries they earn, they will not be able to buy a house. This is where our situation is now.”

3 Things that kept Kongngy being strong all along his journey 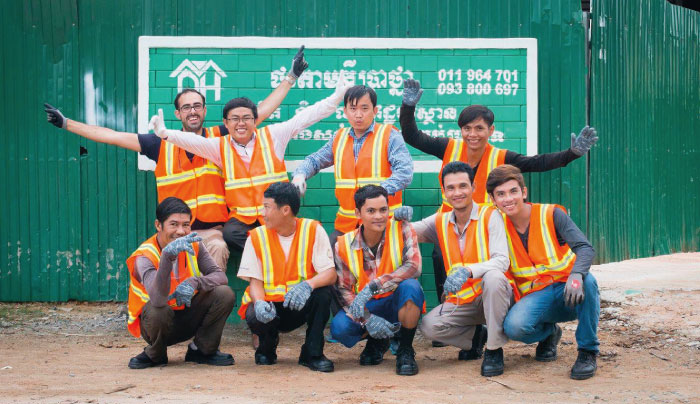 So how could this man convinced all the voices against him and provide affordable houses for middle-low income people, despite he did not have any knowledge in construction, engineering nor business? The story behind was rather lighthearted. Kongngy asked for a permission from his wife to challenge his dream only for three months, and promised to abandon the idea to become a social entrepreneur if he failed to achieve anything during the time given.
Kongngy’s action? He participated in a business contest and won the first prize!

When we asked what made him believe in his idea firmly and never give up, Kongngy mentioned three resources of his motivation:

1. The family background
Kongngy said, “every time I see the working and living conditions of garment workers, my heart hurts. I know their hardship because I used to be very poor, too. They already work in a bad condition for many years and now they deserve better lives. Garment workers send remittance to support their family. They are women, and the backbone of the country.

2. Conviction
“We saw we could do it. We saw how to build a house by rice straw (mud bricks) on YouTube many times and tried ourselves. We knew that we could do it.”

3. Responsibility
“I didn’t give up also because three of my staffs who also quitted their jobs to join me.”

One thing inspired Kongngy was a word form a professor he met in a seminar: “Making money is happiness, but making others happy is super happiness”.
Kongngy told us, “now I create jobs. We have 13 workers and all of the workers are already above the minimum salary. This makes me a little bit proud. We also want our investors to get money, but at the same time to care more about impact rather than the money back.
Currently, My Dream Home receives supports from organizations of France and UK, and is ready to welcome more attention from all over the world who cares about social impact.
“What makes me most happy is when people don’t expect to get a house get a house,” Kongngy concluded. 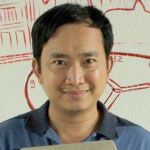 Kongngy Hav, Founder of My Dream Home

Born in Kampong Thom province in 1985. Despite having a relatively poor family background, Kongngy managed to study at the RUPP in Sociology, and later MA in Development Studies. After graduation, he worked mainly in nonprofit sectors such as Save the Children Australia and the Mekong Institute in Thailand for 7 yesrs. He moved to Melbourne, Australia in 2012 and learned about the house made by rice straw, which gave him an inspiration for My Dream Home.
My Dream Home was established in 2013 following his return to Cambodia, with a goal to build affordable house for everyone. This mission is enabled by Lego-like interlocking bricks, with which a house can be constructed more than two times faster and 20 – 40% cheaper compared to a traditional red brick one. The material used, commonly referred to as “red-clay bricks”, is made by burnt clay. There has been an increasing international attention on Kongngy’s project for its sustainability because his bricks are made of soil and the shape largely contribute to reduce the use of cement and other stabilizers.