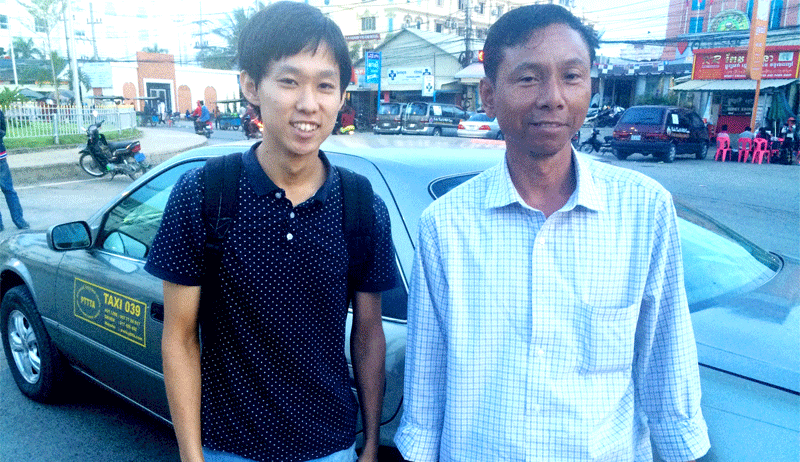 Report: Tried the land route between Siem Reap and Bangkok by taxi

Across the border between Cambodia and Thailand

Hello. It is Yamazaki Tatsuo who was interning in Siem Reap, Cambodia for 9 months from March 2015. In December 2015, I returned to Japan after finishing my internship.
At that time, I wanted to cross the border once by land. So I made the flight reservation from Bangkok, and moved from Siem Reap to Bangkok by a land route!

There are mainly two means of traveling by way of land between Siem Reap and Bangkok: a bus and a taxi. This time we headed to Poipet on the border with a taxi and when we entered Thailand we switched to a bus bound for Bangkok. There are three reasons for choosing a taxi,
1. What you can do with friends going with friends , 2. Taxi arrive earlier than bus, and 3. acquainted with a taxi driver It was for.

What is necessary for overland land border crossing

Cambodia – Three things are necessary when crossing the Thai border. Passport with an expiration date of more than 6 months and with stamp space to press at the time of entry and departure, departure card in Cambodia, and ticket to leave Thailand.

What you need for overland land border crossing

Let me now describe how I actually moved from Siem Reap to Bangkok. 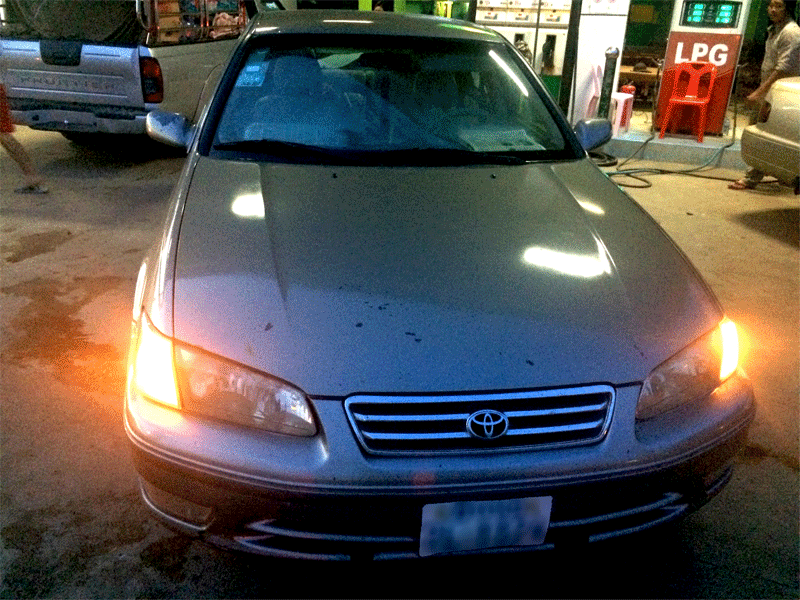 However, although I went to the meeting place while rubbing my sleepy eyes, the taxi arrived 20 minutes late.
Arriving at the Cambodian border Poipet in a blink of an eye! The journey time was only 2 hours and half. In the meantime there was no break, so I recommend you to go to the bathroom before departure.

He can speak English.

4 steps to across the border 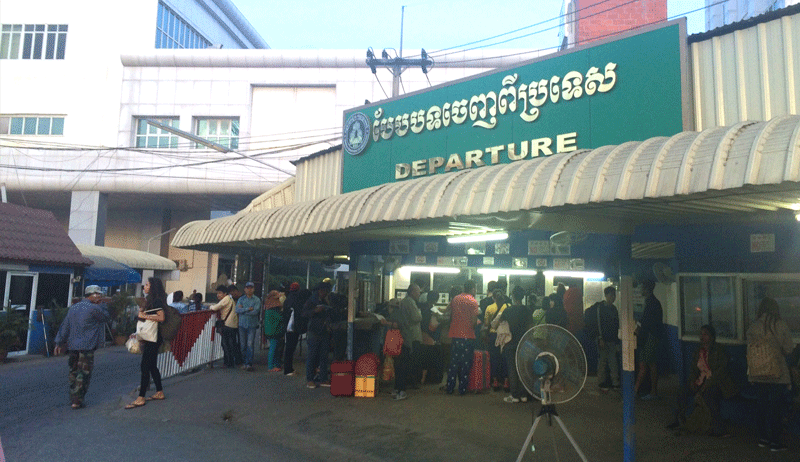 When I got to the border city Poipet, I left the taxi driver and head for the border.
There were the following four steps when crossing the border.

4 steps to across the border

2. Walk and cross the border 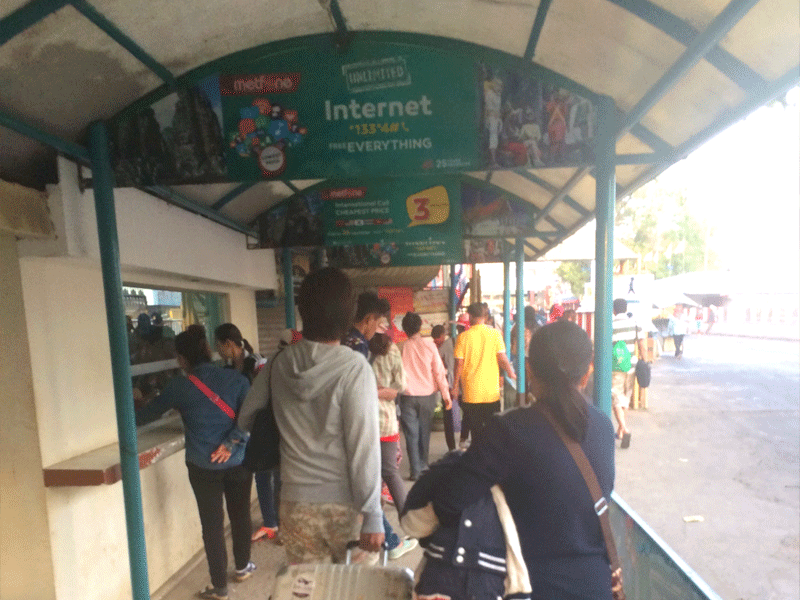 After completing the departure procedure, I crossed the border by walking. While I was going to enter Thailand’s immigration procedure, I was spoken to by various people such as motorcycle taxi drivers, but let’s just ignore it. The border can be crossed in a matter of minutes and it is not necessary to borrow the power of someone special.

3. Thai immigration process
After walking 200-300 m from the Cambodian site, I could see the immigration site in Thailand on the left side of the road. Foreign nationals will be screened on the 2nd floor of the building. Thai entry and exit cards and passports were required for the review, but the immigration card was not in the judging grounds. Get it on a small desk just in front of the stairway to the judging ground. I think that many people overlook this, but even if you miss it you can go back and say it. I arrived at the judging hall around 7 o’clock, but already a lot of people waiting for the appraisal were pretty well, it took about 40 minutes to my turn. At the screening, passport and completed entry card are submitted. I was asked where I should go in Thailand when I answered Bangkok, I was able to get through.

4.Baggage inspection
When you leave the building of immigration control and walk further, the luggage inspection site will be visible. Finally, I finished checking my luggage here!

I found a cheap bus to Bangkok! How much is only 6 USD! 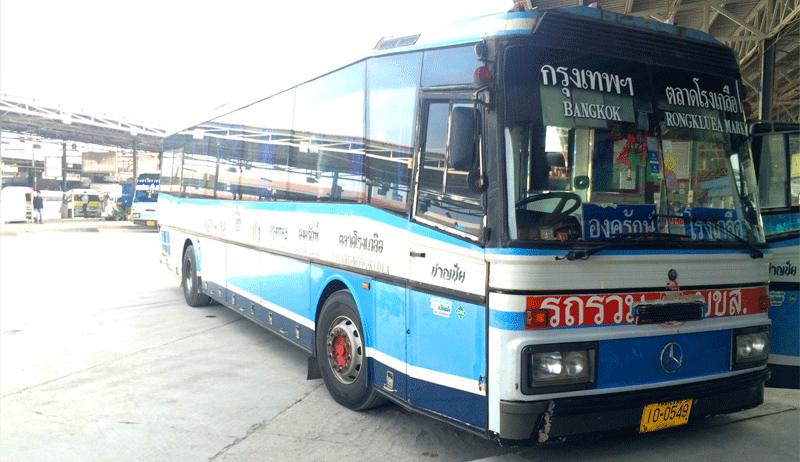 Because taxi can not enter Thailand, after entering Thailand we will look for a bus to Bangkok. As we had decided to ride the bus “casino bus” in advance, when asked somewhere about the casino bus somewhere, “The casino bus has already left”.

Furthermore, the casino bus is only at 6 o’clock and 12 o’clock. As expected no going to wait until 12 o’clock so I decided to look for an alternative bus. When I am staring around there, I found a bus bound for Bangkok. When you ask the price, it is 210 Baht! About 600 yen in Japanese yen. Because this is cheap I took a ride with a friend that I only have to get on.

I was able to sit comfortably inside the car with rattles.

However, when I often listen to the bus tour operator story I thought that it would take 5 hours at around 14:30 to arrive in Bangkok, but the time has already been delayed and the bus has departed. As I stopped at some stops on the way, I think that this bus is probably the bus that Thai local people ride. When talking with a friend that such a trip of travel is also good, I went to a resting place about 3 hours after I departed.

Forcibly dropping the bus with the feeling of eating, buying rice with a stall while watching other Thai people, lunch. It was quite delicious. About 3 hours after the break I finally arrived in Bangkok. I arrived at North Bus Terminal in Morchit. From there we moved by a meter taxi.

The point of caution when traveling is basically not to follow even if spoken to by a strange person. When you cross the border or cross the border, you can call out from various people, but ignore it. When I found a bus to Bangkok on Thai side I chose a bus with a receptionist to buy a bus ride ticket. The result time took a while, but I could safely reach Bangkok.

Regarding the land transportation and entry and departure between Siem Reap and Bangkok this time, it was comfortable without any problems. The taxi also traveled safely and there was no anxiety. Strictly speaking, I could not get on the bus after entering the aimed Thailand, but failing to take unexpectedly long time to arrive in Bangkok was a failure, but there was not any problem other than that. I think that it was possible to arrive earlier as long as securing a bus at the Thai border is done properly.
Everyone please refer when traveling from the Siem Reap to Bangkok by land!
Land journey date: December 2015

How to get from Bangkok to Siem Reap by direct bus